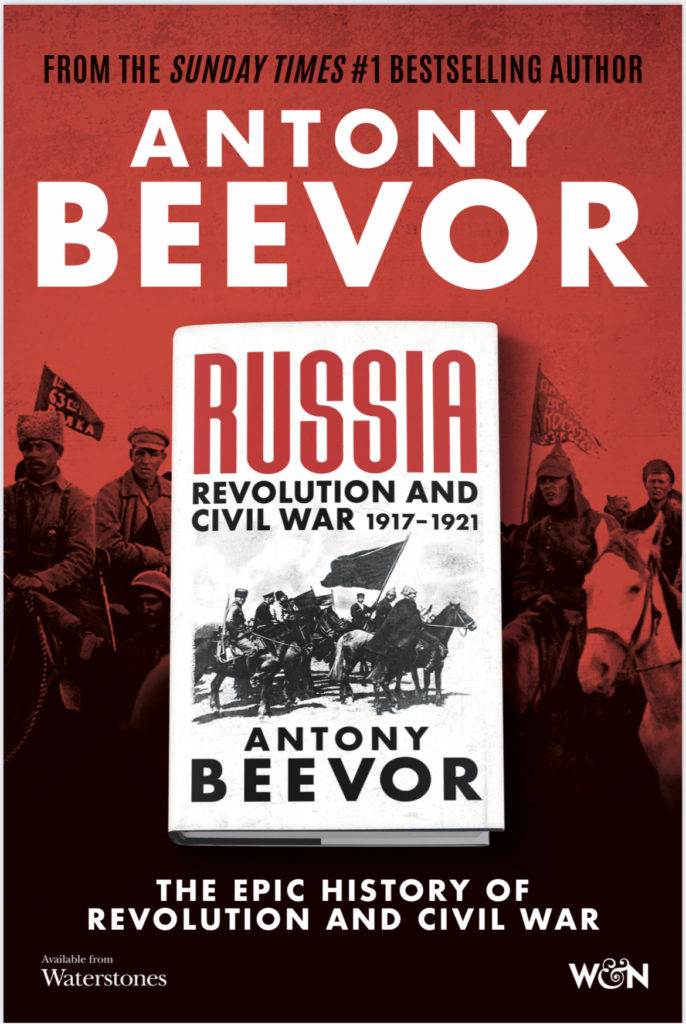 Antony Beevor was educated at Winchester and Sandhurst, where he studied military history under John Keegan. A regular officer with the 11th Hussars, he left the Army after five years to write. He has published four novels, and thirteen books of non-fiction. His work has appeared in thirty-four foreign languages and sold more than eight million and a half copies.

His books include Inside the British Army (1990); Crete — The Battle and the Resistance, (1991) which was awarded a Runciman Prize, and Paris After the Liberation, 1944-1949 (written with his wife Artemis Cooper and published in 1994). He has also contributed to several books including The British Army, Manpower and Society into the Twenty-First Century, edited by Hew Strachan; to Russia – War, Peace & Diplomacy in honour of the late John Erickson; to Kokoda – Beyond the Legend (2017) edited by Karl James; and The End of 1942 – A turning point in World War II and in the Comprehension of the Final Solution? (Yad Vashem, 2018) edited by Dina Porat and Dan Michman.

Stalingrad, first published in 1998, won the first Samuel Johnson Prize, the Wolfson Prize for History and the Hawthornden Prize for Literature in 1999. Berlin – The Downfall 1945, published in 2002, was accompanied by a BBC Timewatch programme on his research into the subject. It was a No. 1 Bestseller in seven countries apart from Britain, and in the top five in another nine countries. The book received the first Longman-History Today Trustees’ Award.

In May 2004, he published The Mystery of Olga Chekhova, which describes the experiences of the Chekhov and Knipper families from before the Russian revolution until after the Second World War. His Russian research assistant Dr Lyubov Vinogradova and he then edited and translated the war time papers of the novelist Vasily Grossman, published in 2005 as A Writer at War – Vasily Grossman with the Red Army 1941-1945.

He has also published a completely revised edition of his 1982 history of the Spanish Civil War, with a great deal of new material from Spanish sources and foreign archives. This came out in Spain in September 2005 as La guerra civil española where it became the No.1 Bestseller and received the La Vanguardia prize for non-fiction. It appeared in English in spring, 2006, as The Battle for Spain – The Spanish Civil War 1936-1939.

D-Day – The Battle for Normandy, published in June 2009, was a No 1 Bestseller in seven countries, including the UK and France, and in the top ten in another eight countries. It received the Prix Henry Malherbe in France and the Westminster Medal from the Royal United Services Institute. His next book, The Second World War, published in June 2012, was a No 1 bestseller in Britain and four other countries, and a bestseller in another five. Ardennes 1944 – Hitler’s Last Gamble (published 2015) became another international bestseller and was shortlisted for the Prix Médicis. His next book, Arnhem – The Battle for the Bridges (2018) is another international bestseller.

Antony Beevor was made a Chevalier de l’Ordre des Arts et des Lettres by the French government in 1997 and in 2008 was awarded the Order of the Cross of Terra Mariana by the President of Estonia. In 2016 he was made Commandeur de l’Ordre de la Couronne in Belgium for his book on the Ardennes.

In 2014 he received the Pritzker Literature Award for Lifetime Achievement in Military Writing, and in 2016 the Norton Medlicott Medal for Service to History. He was awarded a knighthood in the 2017 New Year’s Honours List. He is married to the writer and biographer Artemis Cooper and they have a daughter Nella and a son Adam.