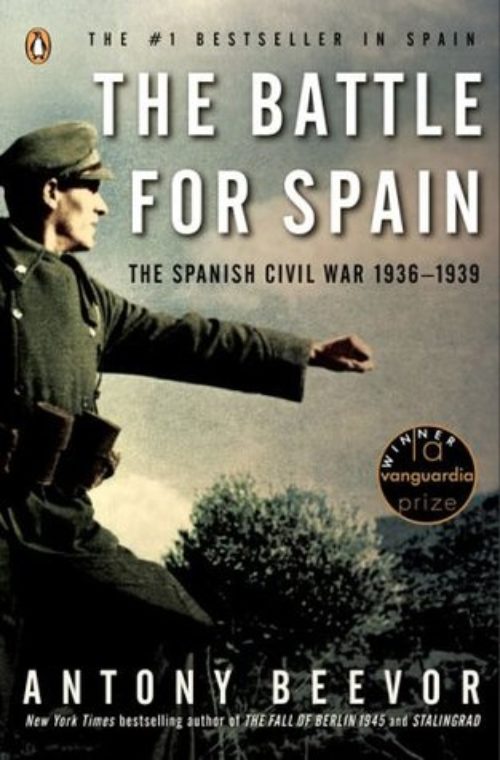 “All in all, perhaps the best general work on the war to be published in the last decades.” Rafael Núñez Florencio, El Mundo
“The Battle for Spain looks likely to become the standard account of the conflict for at least the next generation.” London Review of Books
Buy now on Amazon

A prototype version of this book was researched in the late 1970s soon after the death of General Franco and was published in 1982. So much new material has emerged in the intervening 23 years and so many new archive documents have become available, that a new attempt became necessary.

The impulse for this transformation came from the Spanish publisher of Stalingrad and Berlin, Gonzalo Pontón, the founder and headof Crítica which over the last thirty years has published more major works of history than almost all the other Spanish houses put together. He wanted a new general history for the 70th anniversary of the outbreak of the Spanish Civil War in 2006. La Guerra Civil Española was published in Spain in September 2005 and became the No 1 Bestseller for the next three months. After five months in the top ten, it sold more than 50,000 copies in hardback. In December 2005, the book received the La Vanguardia prize for non-fiction. The book has been a top ten bestseller in seven countries.

For all non-Spanish editions the original synopsis of the country’s history has been included as a very brief reminder for readers. The structure and the general approach also remain more or less the same. The real difference lies in the detail from new sources, both Spanish and from foreign archives.

The Spanish Civil War, even after all these years, remains one of the most passionately debated conflicts of modern times. Many see it as the opening round of the Second World War. Some supporters of the Republic still believe that a victory of the left in Spain would have defeated fascism and saved Europe from the horrors to come. Nationalists, on the other hand, argue that the civil war, almost a world war by proxy, was in fact the opening round of the Cold War between western civilisation and Soviet dictatorship. This book charts not only the course of the war in a fresh light, but illuminates the vicious infighting on both sides. The hopes and fears of a whole generation foundered in disillusionment and despair at the collapse of the Spanish Republic, under the onslaught of General Franco’s forces supported by the Nazi Condor Legion and Mussolini’s intevention with ground and air forces.

Reviews of the new Spanish edition in September 2005, which won the La Vanguardia Prize for the most important work of Non-Fiction in 2005

“A book which reads extraordinarily well, (and this should be no surprise to those who know his very famous Stalingrad and Berlin), both for new readers as well as for those who already know the immense bibliography on the Civil War. From the very first moment, Beevor recreates the political climate of the period as if it were a present compelling for everyone. Problems are debated and destinies played out which affect us and which are important to us. The structure of the book, the rhythm of the action, the insights on the characters, the white terror, the red terror, the revolution and the political infighting, the foreign intervention: all, despite belonging to that ‘other country’ [of the past], puts us right back in the war amid the flames of those years. Yet it is in his account of the military operations that Beevor is at his most brilliant. . . . This book is destined for the first rank of general histories of the Civil War.” Santos Juliá, El País
“His narrative capacity, which has fascinated his readers since Stalingrad, is confirmed once again in this book, which will contribute, without doubt, to constructing the historical memory of the civil war which we need: a non-sectarian memory, broad and deep, which covers all sides of the miasma and which explores the reasons which led to to that sleep of the reason which was our last civil war.” Ricardo García Cárcel, ABC
“All in all, perhaps the best general work on the war to be published in the last decades.” Rafael Núñez Florencio, El Mundo “One of the books of the year” La Vanguardia “Beevor has surpassed the challenge he set himself with efficacy, rigour, soundness and clarity. And considering that it is now seventy years since the civil war, which is still the object of permanent controversy in our country, this book constitutes a work which is more than meritorious.” Xavier Casals, Clio “The magnificent book of Antony Beevor on the Civil War, really using this time the Moscow archives and the recent bibliography of the war, is an example of how to explain the logic of the war.” Antonio Elorza, El País

“The updated version, which marks the seventieth anniversary of Franco’s so-called national uprising, is much more than an update. Except in the fluency of the writing, which is a constant joy of Beevor’s output, the magisterial handling of copious material, and the expertise the author displays in military history, the new book is so different that it could almost be mistaken for the work of a different writer. . . he has produced a moving masterpiece.” Felipe Fernández-Armesto, The Times Literary Supplement “Most nations are deeply suspicious of foreigners who write books about them. Thus, the most convincing tributes to Antony Beevor’s history of the Spanish Civil War come from Madrid’s reviewers whose applause kept this book at the top of their bestseller lists for months. . . Access to the Soviet archives, together with a mass of new post-Franco material available in Spain, have caused him to rewrite extensively, to formidable effect . . . Fascination lies in the human drama, superbly captured by Beevor. . . Beevor’s book is a vivid chronicle.” Max Hastings, The Sunday Times “A gripping, revelatory account. . . Beevor tells the familiar but still terrible tales of the assault on Madrid, the Aragón offensive and the final battle of the Ebro with characteristic verve – but he is also very good on the political manoeuvrings of this most intensely ideological of conflicts.” Andrew Roberts, The Sunday Telegraph “This is an enthralling book. The narrative is masterly, wonderfully clear as a guide through the labyrinth. It is even-tempered and full of good sense. . . it is admirable.” Allan Massie, The Literary Review “If we now read Beevor, with all the benefit of a diligent historian’s hindsight, we can see how and why it eclipses in terms of treachery, self-serving, corruption, back-stabbing and sheer confusion of ideology and campaigning tactics the English and and American civil wars, which seem rather well-mannered, local skirmishes in comparison. . . Only with Franco’s death could the Spain we know and love today begin to flourish. To appreciate the magnitude of that rapid and extraordinary achievement, do read Antony Beevor’s account of the bubbling cauldron of horror from which Spain escaped.” Tom Rosenthal, The Daily Mail “It is an admirably clear-sighted account. What Beevor does so well is to place the war in the context of Spanish history and world politics. . . Beevor’s understanding of warfare and tactics is second to none . . . This is a great achievement.” Miranda France, The Daily Telegraph “A very different book, which displays all Beevor’s exceptional narrative skills and literary flair. The story he tells is grimly familiar, but he presents it with a freshness, an eye for detail and a degree of detachment that makes this one of the best accounts to date of the Spanish crisis.” Richard Overy, The Evening Standard “As might be expected of any book by Beevor, the job is done in clear prose, peppered with fresh perceptions, especially where strategy, tactics and soldiers are concerned. . . his two big contributions are to rethink the military conflict and his judicious use of the Russian material.” Paul Preston in The Times “It is powerfully brought to life, not only by his practical grasp, but by often graphic material found recently in Spanish, German and particularly, Russian archives.” Jeremy Treglown, Financial Times “The current debate focuses on how the republic and, indeed, the civil war should be remembered. Spain’s socialist prime minister, José Luis Rodríguez Zapatero is due to present proposals for what to do with the underground basilica that Franco built for himself at the Valle de los Caídos, the “valley of the fallen”. He should read Mr Beevor’s book first.” The Economist “Antony Beevor’s revised history of the civil war, which vividly anatomises a state and a society in the process of disintegration, is a tract for our times. . . Above all, he has Beevorised the book, given it the richness of detail and the narrative drive that made Stalingrad such a success.” Piers Brendon, The Guardian “In many ways it’s his most impressive book to date because he coolly makes sense of such a complicated story: the narrative sweep is consummate, the seamless use of so many sources masterful, and the eye for detail makes it a superb read.” Simon Sebag Montefiore, The Mail on Sunday “The Battle for Spain looks likely to become the standard account of the conflict for at least the next generation.” London Review of Books “Beevor’s signal contribution to the history of the Civil War is his dissection of the military shortcomings of the Republic’s war effort. . . Essential reading. He has made extensive and intensive use of the Spanish sources available.” Raymond Carr, The Spectator “I do not think it is an exaggeration to say that, although it is a general history, as a military history of the war it is the best that has been written so far in English. His description of the main battles are masterly and full of new and revalatory detail.” Gerald Howson, History Today “Every Spaniard now has a brilliantly written, judicious and non-ideological history of the Civil War to contemplate. . . that is the scale of Antony Beevor’s achievement.” Michael Burleigh, The Tablet “The Battle for Spain is this summer’s corking military history, the successor to his Stalingrad and Berlin.” David Sexton, The Evening Standard “Beevor uses recently released Soviet and Spanish archives to update radically his 1982 study, to dramatic effect’” Sunday Times “For the big picture of the war, all the more powerful for its blending of narrative intensity with emotional restraint, there is no rival to Antony Beevor’s masterly, The Battle for Spain.” Boyd Tonkin, The Independent

“Antony Beevor is a contemporary Tolstoy who, with his books on history, is creating a literary masterpiece which will stand the test of time. . . [he] proves that history today is one of literature’s most vital branches.” Dagens Nyheter “A brilliant account of this dark chapter of Spain’s and Europe’s history. . . With this striking book Antony Beevor strengthens his position as the leading military historian of our time. He tells us in an accessible language about our culture’s most heartbreaking conflicts and darkest tragedies.” Håkan Arvidsson, Svenska Dagbladet

“Beevor’s strength, as established in his earlier works, is his narrative mastery.” Sydney Morning Herald