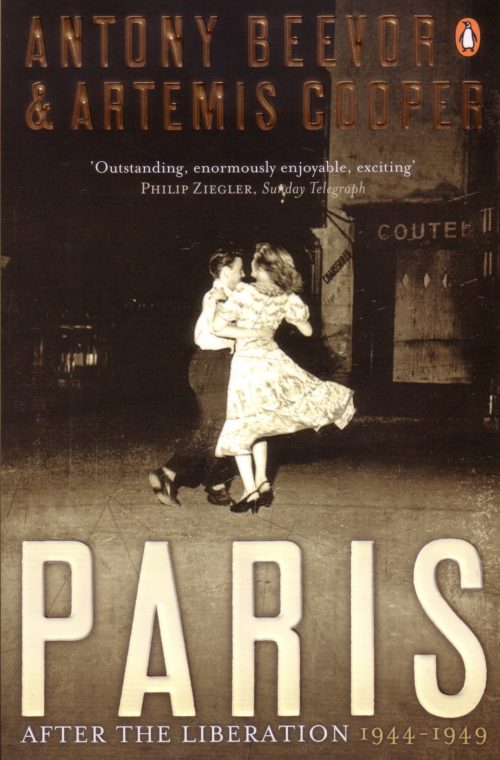 “There is hardly any aspect of French life during that period which the authors do not explore, always with compelling liveliness and omniverous zeal... I shall return gratefully to it again and again.” Alistair Horne, The European
Buy now on Amazon

When General Leclerc’s troops entered Paris to save the uprising by the Resistance, they were greeted by the wildest scenes of joy ever witnessed in modern times. Next day – 26 August 1944 – half the population of the city converged to watch General de Gaulle’s triumphant progress from the Arc de Triomphe to Notre-Dame.

The spirit of freedom was intense, but celebration was edged with revenge. Marshal Pétain’s regime was now cursed. Scores were settled in a rough and uneven justice, while black marketeers grew rich on the misery of the population.

Yet a vibrant energy gripped the young of Saint-Germain and the Latin Quarter, who ignored hunger as they argued through the night in a tumult of ideas.

For the huge variety of foreigners arriving – journalists, writers, artists and diplomats – rediscovering the most elegant city in the world was pleasure enough. Theatre, haute couture and the society that enjoyed them sprang back to life with renewed vigour, and in smart restaurants the headwaiters who had bowed to the Germans now welcomed back their old customers.

Yet a new struggle was about to begin as Paris became the diplomatic battleground in the opening stages of the Cold War. Even the fashionable world and the existentialists of Saint-Germain-des-Prés were diverted from their preoccupations as Europe again appeared on the brink of a new world war.

Paris after the Liberation is a social, political and cultural history of this extraordinary period, an epoch charged with powerful and conflicting emotions and intellectual change. Against a fascinating and dangerous political background, every aspect of life is portrayed in relief – the atmosphere of the street, of cafés, restaurants and night-clubs, fashion houses and salons and painters’ studios.

Read Less
“Anglo-Saxon writers have often been more objective than their French colleagues in dealing with these dreadfully delicate periods. The American historian Robert Paxton is still the most trustworthy commentator on Vichy France. Antony Beevor and Artemis Cooper also enjoy that mixture of love for and detachment from the French which allows them to script a dashing, multi-dimensional story. Here, behind colourful and poignant anecdotes, national myths are punctured without being swapped for distorted jingoistic legends. . . This book covers all aspects of life – diplomacy, strategy, rationing, politics and politicking (from Churchill, Pétain’s and de Gaulle’s point of view), the international theatricals and the tourist invasion, blitzkrieg and Ritzkrieg – to create a lovely tapestry, threaded with facts and figures, not merely patchwork. I grew up in Paris in those years: that was the way it was.” Olivier Todd, The Sunday Times
“Books of this kind are extraordinarily difficult to write. Smoothly flowing narrative, with social comment, political analysis and descriptive writing deftly integrated, must conceal a firm infrastructure and much laborious organisation of material. Unwavering control is necessary at every point. This the authors unfailingly provide. Technically the book is outstanding: it is also enormously enjoyable to read – exciting, lively, funny, and admirably tolerant and objective in its opinions. It is hard to see how it could have been better done.” Philip Ziegler, Sunday Telegraph
“There is hardly any aspect of French life during that period which the authors do not explore, always with compelling liveliness and omniverous zeal. . . As a vivid picture of what Paris life was really like, in every detail, this book at times reminds one of that great classic of the Second Empire, the Goncourt Diaries, and I shall return gratefully to it again and again.” Alistair Horne, The European “An entrancing read” Richard Lamb, The Spectator “This book, like the city it discusses, oscillates satisfyingly between blunt history and roistering gossip. When reconstructions are needed for the inevitable commemorations, they will be found in abundance – facts, ideas and feelings – on every page of this considered, lively chronicle.” Frank Delaney, The Sunday Express “As one might expect from their previous works, they have done a thoroughly professional job in reconstructing the sensations of Paris in the years after the liberation of 1944, skilfully balancing historical narrative with social analysis, and tempering the appalling with the absurd.” Jan Morris, The Independent “Antony Beevor and Artemis Cooper, a married couple who have individually written excellent books, have now combined to describe Paris after the Liberation. . . a rich and intriguing story which the authors disentangle with great skill.” Piers Paul Read, The Sunday Telegraph “This absorbing book. . . explores all worlds, from tenements, brothels and factories, jazz cellars and studios, to salons, law-courts and the fossilized châteaux of vieille France. Beevor and Cooper give a rich, many-layered account, selecting from official documents, private archives, memoirs and histories with a wonderful lightness of touch, so that the most complex events become clear.” Jenny Uglow, The Independent on Sunday “This valuable new book . . . a true vade mecum of an era” Paul Ryan, The Irish Times “To understand France today you should read this book about France yesterday, a carefully researched and admirably written account. . . The book is, however, more than a very competent account of French politics between 1944 and 1949, it is a reminder of how cold the Cold War was, how nearly the communists seized power in France. . . The book also provides a wonderfully enjoyable picture of social life in Paris in those years. It is compulsive reading.” Mark Bonham-Carter, The Evening Standard “A perceptive portrait of Paris in its heyday.” J.G. Ballard, The Times “Paris After the Liberation held me gripped by every page and I was impatient at any interruption. The details of this book are spellbinding, often frightening and sometimes funny.” Alec Guinness, The Daily Mail “The fascinating Paris After the Liberation” Alan Massie, The Daily Telegraph “After Antony Beevor’s Crete and Artemis Cooper’s Cairo, the excellence of their joint Paris After the Liberation should have come as no surprise. De Gaulle’s race for Paris makes one holds one’s breath; then the skein brilliantly unravels. Every shade of collaboration is traced and – brand-new – the details of Russian control of the French Communist Party.” Patrick Leigh Fermor, The Spectator “This is a beautifully written book about a vast tapestry of military, political and social upheaval, remarkably well researched, wise, balanced, very funny at times . . . I was a witness to events in Paris in the first desperate, glorious, mad weeks, and this is just how it was.” Dirk Bogarde, The Good Book Guide

“The joy of this volume is that nothing in it is laboured or overworked: historical overviews dovetail perfectly with a close reading of daily life, always sharply and tersely drawn and using a rich supply of material.” Kirkus “The key to this book’s enjoyment is its character. It delights with apt, perfectly placed scenes.” Booklist “This engaging chronicle captures the desperation and exhiliration of those years through a blend of history, eyewitness accounts, interviews, and telling incidents.” Publishers Weekly “A thorough, fascinating account of postwar Paris. The book is filled with sound, balanced insights and witty observations.” Library Journal “A splendid chronicle of the political, social and cultural forces that were unleashed by the war and that played themselves out in Paris in an acrimonious battle for the future of France.” Philadelphia Enquirer “A lively and attractive book” Tony Judt, The New York Review of Books “In the 1940s, France went to war with herself yet again, and the tale, told with relish by Antony Beevor and Artemis Cooper in this fascinating book, is calculated to stir mixed feelings in the devoutest Francophile.” David Coward, The New York Times “A rich, grim but often funny and always marvelously intelligent venture into the French past as well as our own.” S.J.Hamrick, The Chicago Tribune “This is a wondrous account that thoroughly matches the brilliance of its subject.” Boston Globe Read More