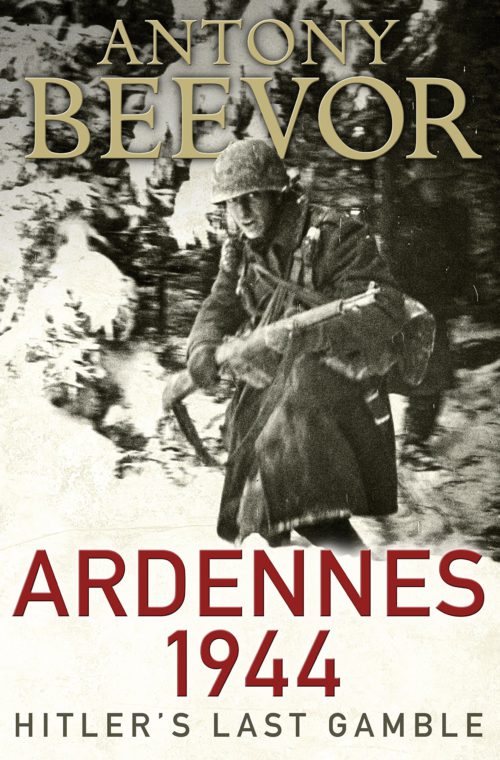 “Impeccably researched, insightfully observed and superbly written” The Sunday Express
“A sweeping, sobering read, written with all the confidence and aplomb that Beevor fans expect” The Independent
Buy now on Amazon

On 16 December, 1944, Hitler launched his ‘last gamble’ in the snow-covered forests and gorges of the Ardennes. He believed he could split the Allies by driving all the way to Antwerp, then force the Canadians and the British out of the war. Although his generals were doubtful of success, younger officers and NCOs were desperate to believe that their homes and families could be saved from the vengeful Red Army approaching from the east. Many were exultant at the prospect of striking back.

The Ardennes offensive, with more than a million men involved, became the greatest battle of the war in western Europe. American troops, taken by surprise, found themselves fighting two panzer armies. Belgian civilians fled, justifiably afraid of German revenge. Panic spread even to Paris. While many American soldiers fled or surrendered, others held on heroically, creating breakwaters which slowed the German advance.

The harsh winter conditions and the savagery of the battle became comparable to the eastern front. And after massacres by the Waffen-SS, even American generals approved when their men shot down surrendering Germans. The Ardennes was the battle which finally broke the back of the Wehrmacht. 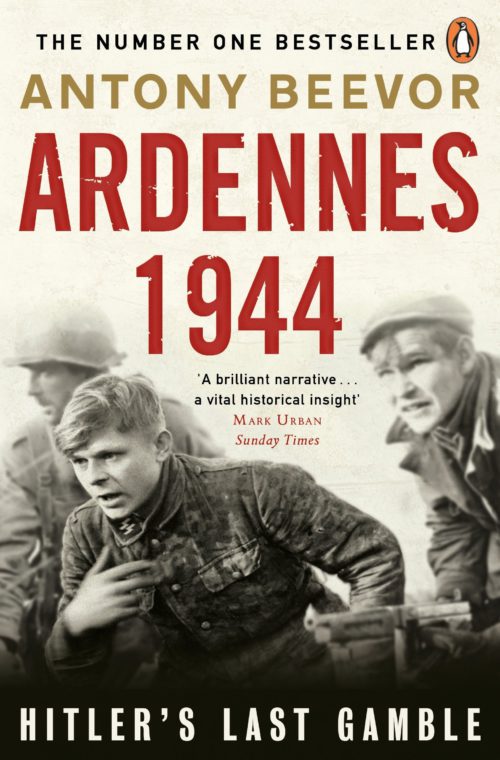 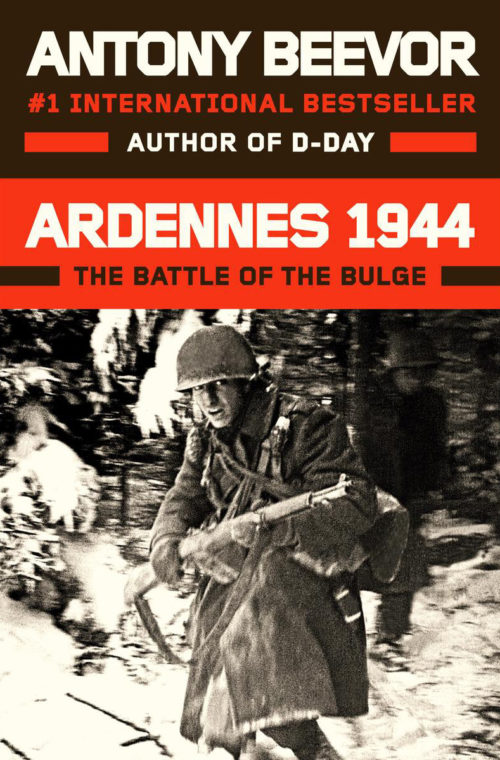 “A treasure of memorable portraits, striking details, fascinating revelations, and broad insights—likely to be the definitive account of the battle for years to come.” Kirkus “Beevor’s intriguing analysis and engaging writing style expertly illuminate both the soldiers’ and generals’ experiences.” Publishers Weekly “He deftly moves from the fox hole to the command post and provides candid portraits of the leading figures on both sides, frank judgments about strategy and tactics, and a brutally honest picture of the horrors of combat. . . Even readers well-versed on the war in Europe will welcome this book. It is exhaustively researched and full of fresh insights and thoughtful explanations. Those who want to understand how the attack unfolded and why it failed will not find a more valuable addition to the literature on World War II.” Christian Science Monitor “In Ardennes 1944, his masterly study. . . Beevor paints a searing portrait of a world weary of war but unable to stop it. . . Beevor’s battle descriptions crackle with you-were-there authenticity” Boston Globe “The confused violence and awful human cost are vividly brought to life. . . anyone reading Mr Beevor’s searing account of the Bulge must wonder again what made young Europeans and Americans capable of doing this to one another . . . a salutary reminder of that thin veneer detected by Freud between the civilized and the primitive in each of us. Ardennes 1944 ought to prompt some careful reflection on our modern age.” Richard Overy in The Wall Street Journal “It’s hard to imagine there’s anything left to be said about the Battle of the Bulge after Antony Beevor’s Ardennes 1944. . . There’s a deep resonance and inescapable sense of completeness to Beevor’s work.” USA Today “Antony Beevor, one of the finest narrative military historians now writing, is a master of revealing vignettes. . . Beevor captures the micro-events of battle brilliantly, the ambushes and firefights, the horrors of tanks swerving over foxholes to bury their inhabitants alive, tales of psychological collapse and superhuman courage. . . What makes Ardennes 1944 so effective, however, is not just the vividness of the prose, the clarity of the author’s presentation of tactical events, or his skill at evoking through description and careful quotation the look and even the smell of the battlefield, Beevor also does a brilliant job at weaving together the grand operational and tactical narratives.” Eliot A. Cohen in The New York Times “A concise and powerful narrative of the biggest, bloodiest and most desperate battle of the war in Western Europe. . . One reason Beevor is such a great historian is his ability to convey a vision of the epic without losing touch with the individual stories that bring war home to the average reader. . . Beevor could lay claim to being the greatest historian of the war in the west and in Russia.” Dallas Morning News “Combines in his usual masterly fashion the big picture with shellhole –level anecdote. . . A book that that tells in vivid prose the story of a great battle, accompanied by impeccable judgements, deserves celebration.” Max Hastings, The New York Review of Books

“The best military prose of our era.” El País “A very great achievement. Beevor is the absolute master when it comes to driving forward a chronological story about something as complex as a big military battle in a brilliant way which makes the great story combine with all the small and personal stories and anecdotes of the soldiers – without letting the the main-currents out of sight.” Jyllands-Posten, Denmark “It was a short, brutal and ultimately futile battle — the last spasm of a dying regime — and no one has recounted it better than Beevor. His gripping, beautifully written narrative moves seamlessly from the generals’ command posts to the privates in their snow-covered foxholes, and confirms him as the finest chronicler of war in the business. His particular genius is for ferreting out those telling details that paint a picture. “One man,” he writes, “found a friend dead in the frozen street face down with a cat sitting on his back, profiting from the last of the body’s heat”.” Gulf News “What builds up is an exemplary picture of the misery and horror of this most appalling conflict, in which more than a million men fought in conditions comparable to those on the Eastern Front, and ‘‘the life of the wounded’’, as one American glider infantryman observed, ‘‘is likely to go out like a match’’.” The Australian “Beevor excels at capturing the reality of the battlefield. . . The whole story is told with Beevor’s usual dash and his deft use of the techniques of bird’s-eye views; long shots and close-ups, both quick and lingering. Among the book’s strengths are its often horrific cameos and miniatures.” Sydney Morning Herald “Ce moment héroïque, l’historien britannique de la Seconde Guerre mondiale Antony Beevor nous le raconte avec sa maestria habituelle – sens du détail, documentation immense et sens haletant du récit.” Jean-Marc Bastière, Le Figaro “Un ouvrage passionant” Le Soir, Belgium “Der britische Militärhistoriker Antony Beevor hat daraus ein Buch von hoher angelsächsischer Erzählkunst gemacht: scharf in der Analyse, lebendig und anschaulich geschrieben, verbindet er in gewohnter Meisterschaft die Linien der Erzählung mit der Perspektive jener, welche die Schlacht in den verschneiten Schluchten, Wäldern und Dörfern erlebten und erlitten.” Süddeutsche Zeitung “Beevor’s obsession with the singular moment and the unpredictable which reaches beyond itself, and thus recounts the whole, is his trademark. He gives full expression to both regarding the unrelenting conflict in the snow-covered forests and ravines of the Ardennes. Here he ranks in the tradition of Edward Gibbon’s Decline and Fall of the Roman Empire, a matrix for that distinct form of Anglo-Saxon literary history which is so engaging on account of its attention to the seemingly insignificant. Beevor’s art consists of just this: to be a writer of history without losing the freedom of telling a story.” Norman Ohler, Frankfurter Allgemeine Sonntagzeitung Read More