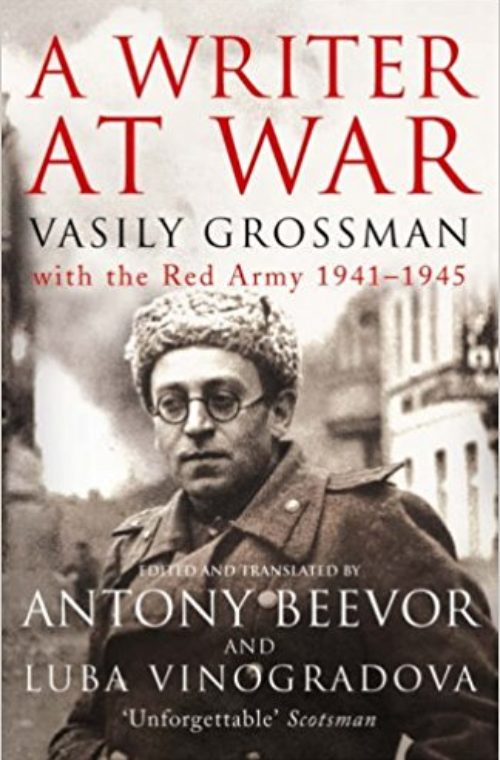 “In bringing his notebooks to a wider audience, and in reminding us about this brilliant witness, Beevor and Vinogradova have done their readers – and Grossman’s memory – a great service” Catherine Merridale in the Independent
Buy now on Amazon

Vasily Grossman’s masterpiece Life and Fate is rated by many critics as the greatest Russian novel of the twentieth century. A Writer at War is based on the notebooks in which he gathered his raw material. It depicts as never before the crushing conditions on the Eastern Front and the lives and deaths of infantrymen, tank drivers, pilots, snipers and civilians alike.

Deemed unfit for service when the Germans invaded in 1941, Grossman became a special correspondent for Red Star, the Red Army newspaper. A portly novelist in his mid-thirties with no military experience, he was given a uniform and hastily taught to shoot a pistol. Remarkably, he spent three of the following four years at the front observing with a writer’s eye the most pitiless fighting ever known.

Red Army soldiers came to love this awkward intellectual for his physical courage and for the honesty of his reporting. He won huge fame for his novel  The People Immortal. Grossman witnessed almost all the major events on the Eastern Front: the appalling defeats and desperate retreats of 1941 when more than 3 million men were captured, the defence of Moscow and fighting in the Ukraine.

In August 1942 he was posted to Stalingrad where he remained during four months of brutal street-fighting. He was present at the battle of Kursk, the largest tank engagement in history, and, as the Red Army advanced, he reached Berdichev where his worst fears about his mother and other relations were confirmed.

A Jew himself, he undertook the faithful recording of Holocaust atrocities in the Ukraine, at Odessa and Majdanek as their extent dawned. His supremely powerful report ‘The Hell of Treblinka’ was quoted at the Nuremberg tribunal.

A Writer at War offers the one outstanding eye-witness account of the war on the Eastern Front and perhaps the best descriptions ever of what Grossman called ‘the ruthless truth of war’.

Antony Beevor first came across the notebooks of Vasily Grossmen when working on his book Stalingrad.

Dr Lyubov Vinogradova, a researcher, translator and freelance journalist, studied biology at university in Moscow, as well as taking degrees in English and German. She received a PhD in microbiology in 2000. She has worked with Antony Beevor for the last fourteen years as well as with other British and American historians.

“No other journalist wrote with the same regard for what Grossman called the “ruthless truth of war”... Coleridge once defined imagination as “the power to disimprison the soul of fact”; Grossman had this power to the highest degree. A Writer at War is impeccably edited, the commentary as informative as it is unobtrusive” Robert Chandler in the Financial Times
“Grossman’s notebooks, which furnished much of the material for his novel, have now been edited and translated into English as A Writer at War by the two persons most qualified to do so: Antony Beevor, as a military historian; and Lyuba Vinogradova, as a Russian researcher able to open doors closed to less persuasive questers... The extracts are linked by the editors with succinct narratives that make it easy to orient oneself in the history of the war. Grossman, like Isaac Babel twenty years before him, lifts war correspondence to new heights” Donald Rayfield in The Literary Review
“Only in the past fifteen years have Western writers – few Russians have wanted to explore the Stalinist era – used access to archives and surviving veterans to uncover the reality of the Eastern war in all its misery. Antony Beevor is among the foremost, and Lyuba Vinogradova is his superbly gifted researcher. The two have now joined forces to translate and edit the notebooks of Russia’s most famous war correspondent, Vasily Grossman. The outcome is a remarkable addition to the literature of 1941-45. . . A wonderful portrait of the wartime experience of Russia, whose people the author loved so much and felt for so deeply. Beevor and Vinogradova’s collection of his writings form a worthy memorial to a remarkable man” Max Hastings in the Sunday Telegraph “It offers a wealth of new details and known facts seen from a new angle... British readers are fortunate to have access to this honest and moving testimony” Andrey Kurkov in the Guardian “The principal editor of this volume, Antony Beevor, showed his command of narrative sweep in his two earlier Second World War books, Stalingrad and Berlin: the Downfall, 1945 , both of which drew on Grossman’s reports. He has now repaid the debt handsomely with this arrangement of entries from Grossman’s wartime notebooks” Daily Telegraph “Magnificent... an excellent English translation... It is not only Grossman the man whose experience in the war has been rescued from oblivion by this publication: it is the experience of millions of Russian men and women” Omer Bartov in the Times Literary Supplement “A Writer at War is a selection of extracts from his notebooks, translated by Lyuba Vinogradova and annotated with trenchant authority by Antony Beevor, who first came upon this archive of life on the Eastern Front while researching his own masterly work Stalingrad... As a pithy acount of war at its most extreme, this fascinating book will rarely be bettered” James Delingpole in the Mail on Sunday “A remarkable and tragically heroic record of the suffering, sacrifices and courage of the Soviet Red Army and people... a quite exeptional testimony on history’s most horrific war” Tribune “A Writer at War, a fascinating collection of Grossman’s notebook jottings, bristles with with pungent observation and incident. Superbly edited and translated by Antony Beevor and Lyuba Vinogradova, the book serves as a companion to Grossman’s classic novel, Life and Fate” Irish Times “Vasily Grossman, one of the finest Russian writers of the past century, whose eyewitness reports from the front form a historical source unparalleled in its immediacy” John Connelly in the London Review of Books “Antony Beevor and Lyuba Vinogradova’s’s superb book A Writer at War. . . no one got anywhere near Grossman for the amount of time he spent at the front and the historic centrality of the actions he witnessed. I’m not sure there has been a parallel in the writing on any other war” John Lanchester in the London Review of Books

“Grossman was a perceptive observer with an eye for essential detail. His vignettes of the fighting at Kursk and the battles that brought the Red Army into Berlin are models of combat reporting, and the elegiac realism of his description of Treblinka merits wide anthologizing in Holocaust literature. This volume stands among the finest eyewitness accounts of Soviet Russia’s war on the Eastern Front” Publisher’s Weekly “In A Writer at War, the British historian Antony Beevor and his research assistant, Lyuba Vinogradova, have mined this rich seam of gold, translating and editing generous excerpts from the notebooks (made available by Grossman’s descendants) and stitching together a coherent narrative from Grossman’s completed articles, his letters and the memoirs of contemporaries, notably his editor at Krasnaya Zvezda. The result is a first-rate volume of war reporting that belongs with the best work of writers like Ernie Pyle, A. J. Liebling and John Hersey” William Grimes in the New York Times “The key to the power of A Writer at War is that it includes not Grossman’s published articles but his private notebook entries. . . Antony Beevor, the acclaimed British historian of Stalingrad . . . and his co-editor and translator, Lyuba Vinogradova, have skillfully provided Grossman’s own words with a substantial framing narrative making it accessible to even to readers unfamiliar with the war on the Eastern Front. But it is Grossman’s own text, often little more than fragmentary, that gives the book its shocking vividness. Like a great novelist, he makes a random detail or anecdote bear the weight of a tragedy that is impossible to grasp in the abstract. . . His combination of passion and etail, of patriotic fervor and journalistic objectivity, makes A Writer at War one of the greatest documents of World War II ever published” Adam Kirsch in the New York Sun “What is striking about Grossman’s war reporting, as gathered in a new book called A Writer at War, is the tension between the moral arc of his storytelling and the poetic isolation of the details contained in his notebooks” Verlyn Klinkenborg in the New York Times “Life and Fate was a blow he struck for humanity, and now, so long after the times that consumed him, A Writer at War is another” David Pryce-Jones in Commentary “Grossman’s stature as a writer has continued to grow with the passage of time and the revival of interest in the clash of the totalitarian titans Stalin and Hitler. A Writer at War, which offers excerpts of Grossman’s notebooks combined with first-rate explanatory narration by the British historian Antony Beevor, will only enhance his reputation” Andrew Nagorski in The Washington Post Read More